Ever-increasing use of the internet means servers in data centres are generating ever-increasing amounts of heat. A British start-up has come up with an ice-cool solution – incorporating Alfa Laval equipment – that reduces cooling bills and associated CO2 emissions by more than 90 percent.

Every time you click “like” on Facebook or do a search on Google, a server located among rows and rows of machines in a data centre somewhere in the world processes a response. Google has an estimated 2 million servers worldwide, Amazon about 450,000 and Facebook in excess of 200,000, and this rapidly growing battery of equipment handles huge amounts of data, in the process generating huge amounts of heat.

These data centres consume phenomenal amounts of energy for cooling – as much as a couple of percent of the world’s electricity, by some estimates. That means massive energy bills – in the United States alone, USD 6 billion is spent each year cooling data centres – and vast amounts of carbon dioxide emissions. With the server industry growing by about 12 percent per year, those energy demands will only increase. In response, some IT companies are establishing their data centres above the Arctic Circle to take advantage of the free natural cooling the location provides.

But a start-up based in Sheffield, UK, has developed an innovative solution that allows servers to be cooled cheaply and efficiently, wherever they are in the world. Iceotope’s innovation is being regarded as one of the most exciting cooling solutions for data centres, and one that could revolutionize the industry. And Alfa Laval heat exchangers play a key role in the system.

Iceotope's solution is based on the same basic idea that has you running your hand under cold water when you burn yourself, rather than blowing on it: Namely, that water is a better conductor of heat than air. In fact, water is 1,850 times more effective at cooling than air.

“What we are trying to do is eradicate waste from the data centre,” says Peter Hopton, Iceotope’s founder and CEO. “We see waste as more than one thing. We see it as wasteful infrastructure that isn’t really needed, and as wasteful power consumption. It is our mission to rethink the data centre and eliminate waste by using liquid cooling technologies.”

The current status quo sees data centre servers cooled by cold air that is blown over the hot components. But this is noisy and inefficient, and it involves lots of equipment that could be eliminated by liquid cooling. “Usually at a data centre, half of the total power consumption comes from fans, air conditioning and air handling, and that is wasteful,” says Hopton.

Iceotope's technology essentially eliminates the need for fans inside the servers. “They are replaced by a system that operates on natural convection,” Hopton says. “We eliminate the computer room air cooler (CRAC) units, we eliminate the compressors, and we eliminate the heat pumps. All that we have is circulation pumps circulating coolant out to external radiators. And that pretty much eliminates up to 97 percent of the power that used to be consumed by a typical cooling system.”

Iceotope’s solution has three cooling stages. In the first stage, at the servers, a special ultra-convecting liquid called 3M Novec Engineered Fluid convects heat almost 20 times faster than water could. This remarkable liquid, in which the motherboard blade is completely submerged, does not conduct electricity as water does, but it does take the heat away from the electronics. The electronics are otherwise unaffected by the liquid. In fact, you could throw your smartphone into a tub of it, and it would continue to work perfectly.

In the next stage, the heat taken out of the servers by the liquid is circulated around the cabinet by Alfa Laval heat exchangers located inside the cabinet. In the third stage, the heat exchangers transfer heat from the secondary loop to a third and final water loop that takes the heat out of the building. The system also allows for heat capture, delivering it in the form of hot water for reuse, such as for heating the building.

There are two Alfa Laval heat exchangers in each server cabinet. “They decouple our cabinet from the building, which means that if there is a fault in the cabinet, it only affects that cabinet, and not any other cabinets in the building,” says Hopton. “With a system like this, in order to be scalable you have to have that level of decoupling. If you’ve got thousands of cabinets, the probability of having a faulty one at some point increases, and you will want the fault to stay in one cabinet rather than causing a fault in the entire building.”

Iceotope's server system typically reduces data centre cooling costs by up to 97 percent; server power demands by up to 25 percent (because there are no fans and no moving parts); and overall ICT infrastructure costs by up to 50 percent, compared with traditional air- or watercooling systems. The system generates water up to 50 degrees Celsius, and that heat can be reused, giving double energy and carbon savings. Because the system is also silent – unlike with noisy traditional air-cooling solutions – servers and supercomputers can operate alongside people, such as in labs.

So this next-generation liquid-cooled technology means that big players in the data centre industry will not be forced to locate their facilities in cold climates. “It makes little difference whether you are operating in the Arctic Circle or on the south coast of Spain or somewhere in Africa,” says Hopton. “With the Iceotope solution you can site your data centres in locations that are more suitable in terms of other criteria, such as connectivity and power, as opposed to having to worry about ambient conditions. The value of the potential market for this product is in the billions.” 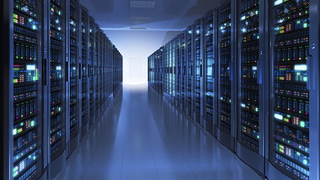 It is our mission to rethink the data centre and eliminate waste by using liquid cooling technologies.