The Avdeevka coke processing plant, located outside Donetsk in Ukraine and owned by Met Invest Holding, is the largest coke processing plant in Europe. It has been operating since 1963, and today, 3.5 million tons of raw coal are processed each year, with the coke output averaging a healthy 73%. Yet, until recently, the plant was not without its fair share of problems.

The Avdeevka plant has eight steam turbines, running on steam produced mainly from gas recovered from the coke production. The electricity produced by the turbines is used in the processing plant, and being sold to the electricity market.

The shell-and-tube condensers installed with the turbines in 1978 have been losing efficiency year after year. The cooling water from the cooling tower is of poor quality, causing corrosion in the tubes. Many tubes had to be plugged. As a result, cooling efficiency dropped even further – along with the electrical output of the turbines. With the price of electricity soaring, increasing the electrical output of the turbines became a top priority. 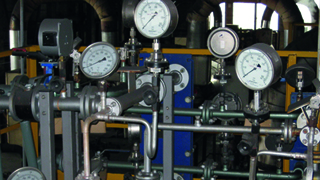 Because of inefficient condensing and clogging of the shell-and-tube condensers, the electricity output of each turbine only reaches 8 MW.

When considering more effective alternatives, Avdeevka recalled its previous experience with plate heat exchangers from Alfa Laval (albeit in other positions around the plant). The company had seen first hand how efficient the plate technology is compared to conventional shell-and-tube technology.

Alfa Laval installed AlfaCond, an efficient plate condenser, at one of the turbines. It was delivered as a complete solution, including condensate vessel, condensate pump, vacuum ejector system, instrumentation and control system. And to minimize fouling on the cooling-water side, Alfa Laval also installed an automatic self-cleaning ALF filter.

Because the AlfaCond condenser is very compact, the entire system fit comfortably in the available space, once the old shell-and-tube condenser was removed.

Compared to shell-and-tube, the Alfa Laval solution facilitates maintenance. AlfaCond is easy to open for mechanical cleaning. Chemical cleaning, too, is facilitated by the low hold-up volume of the compact AlfaCond condenser. Even more importantly, Avdeevka no longer needs to shut down the turbine every time a condenser tube is leaking, thus reducing expensive downtime.

Another advantage with plate technology is that the plates become 100% clean at every mechanical cleaning. As a result, efficiency does not decrease over time.

Thanks to the AlfaCond condenser, the plant is now self-sufficient for electricity, even in the warm weeks of August and September. The payback time for this kind of installation, where the electricity output increased by 4 MW, was approximately 3 months.

It was important to Avdeevka that Alfa Laval could supply a complete solution, including the condensate and vacuum systems. The company wanted to deal with a single supplier who could provide all system components and a complete set of documentation.

Mr. Shmal’ko says that the AlfaCond condenser has been operating without any problems since it was installed in February, 2008:

We are completely satisfied with the way our AlfaCond condenser is working. We are impressed by its high efficiency and by the effectiveness of the vacuum-ejector system and the ALF-filter.

As the evaluation of the first AlfaCond is now complete, Avdeevka’s plan is to replace the seven remaining shell-and-tube condensers with AlfaCond modules. The schedule calls for one such replacement each year. 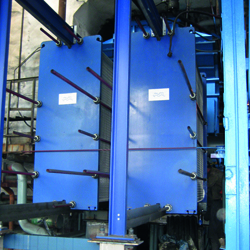 The AlfaCond module is a standardized system designed for condensing vacuum steam from steam turbines and other steam-consuming equipment used in the power industry. The AlfaCond module is a complete, integrated system, pre-configured with all the subsystems and components required to ensure efficient, reliable steam condensation under the rated design conditions. The core of this modular system is the AlfaCond plate surface condenser, which is designed for highly efficient vacuum-vapour condensation. The unique design of the AlfaCond condenser results in substantially higher thermal efficiency than conventional shell-and-tube units. Hence, a much smaller heat transfer area is needed, making the condenser extremely economical to operate.