Lord of the Rinks

From the newest National Hockey League arenas to a tent in the Egyptian desert, CIMCO is the foremost company on ice. 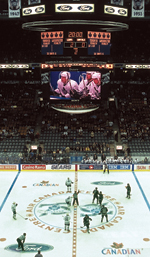 For most people, making ice is a simple process: Take water. Freeze it. For CIMCO, Canada’s largest provider of industrial refrigeration systems and one of the world’s premier suppliers of recreational ice rink technologies, making ice is big business. In the world of keeping things cold, business is red hot.

“It’s ironic that in Canada, a country notorious for cold weather, refrigeration is a growth market, but that’s the reality,” says Steve McLeod, president of CIMCO. “Every year we wonder if the demand can continue to grow, and every year it does.”

Demand for refrigeration technology – both industrial and recreational – is high, not just in Canada, but around the world.

On the industrial side, consolidation in the food and beverage sector has been an impetus for many companies to upgrade their refrigeration and cold storage systems. Recreationally, the popularity of ice-related sports – such as hockey, curling, figure skating and speed skating – is reaching new heights, both in Canada and internationally.

“The demand for recreational ice rinks is phenomenal,” McLeod says. “It seems that more and more people, in more and more countries, are discovering the joys of skating.”

Recreational skaters aren’t the only ones relying on CIMCO’s expertise. CIMCO has been designated as a preferred supplier to the prestigious National Hockey League, home to most of the best ice hockey players in the world. The recognition is a point of great pride for McLeod.

“Companies pay millions of dollars to be associated with the NHL. But CIMCO isn’t a sponsor. The NHL gave us this designation because we earned it,” he says.

The NHL logo proclaiming CIMCO as the preferred supplier of ice rink equipment – a designation CIMCO has held for four years – is now an integral part of CIMCO’s identity. It is displayed prominently in the lobby of the company’s head office in Toronto. It’s even on McLeod’s business card.

“The NHL came to us many years ago because teams were having problems maintaining ice quality. They were all fixable problems, but required a specialized knowledge. With 87 years of experience, CIMCO was able to establish new standards, and ultimately we co-wrote the NHL’s guidelines for ice making and ice maintenance,” McLeod says.

From the ground up

As new arenas are being built throughout the NHL, CIMCO is a key partner in the construction process. “We take it from the ground up – literally,” McLeod says.

“We are involved in the excavation of the site, and work with the architects, engineers and general contractors to ensure a seamless, complete process that will result in the best possible ice once the facility is built.” Even after a new arena is completed, CIMCO stays involved as a consultant, helping to train the ice makers in each city and writing the manuals for each building.

“The ice maker needs to know what he’s doing. Every building is different, and there are many complex factors affecting the quality of the ice. With so much at stake, you can’t afford to have anything go wrong,” McLeod says.

Making the ice is only part of the process, he adds. Ensuring the proper conditions is also crucial.

“You’ve got a building that goes from being empty to holding 18,000 people in a couple of hours. You also have television lights, which are intensely hot, shining directly onto the ice surface. The dynamics of the building change dramatically, and it’s important to have the necessary ventilation, dehumidification and air conditioning systems in place to keep the ice at a constant temperature,” McLeod says.

CIMCO has developed sophisticated new technology not only to create and maintain the ice, but also to keep an eye on it. Computer-based infrared cameras are placed strategically around the rink, sending signals to different parts of the ice. The data is then relayed to the computerized refrigeration system, which adjusts the conditions accordingly.

Even if the technology is extremely sophisticated, McLeod stresses that customer service is the real key to CIMCO’s success. Through its 500 employees, CIMCO provides round-the-clock support, including keeping a full parts inventory in its 22 offices across Canada and the United States.

“Customer care is at the core of everything we do,” he says. “We aim to attract talented, skilled, dedicated employees. We’re on duty 24/7. And we bring a sense of urgency and sincerity to all of our projects, showing our customers that we care about their facilities as much as they do.”