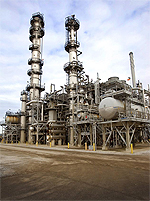 The St Clair Rive ris a 64-kilometre shipping channel that forms a natural international boundary between the United States and Canada in central North America. It flows south from Lake Huron, one of North America’s five Great Lakes, which constitute the largest body of freshwater in the world. The river is a busy shipping channel, carrying large, ocean-going freighters throughout the Great Lakes Waterway. Just south of the city of Sarnia, in Ontario, Canada, is Shell’s Sarnia Manufacturing Centre, one of several petrochemical facilities in the area.

The Shell refinery processes up to 72,000 barrels of crude oil each day. Built in 1952 by the Canadian Oil Company, it became part of Shell in 1963 and now provides a wide range of petroleum products for the Canadian market.

Employing 290, the Sarnia refinery produces distillates such as diesel fuel, furnace oils and jet fuel, plus heavy oils to power large machines and ships. It also turns out the liquefied petroleum gases propane and butane, as well as various chemicals used in the manufacture of paints, adhesives and rubber – and, of course, gasoline. Sarnia is one of three Shell refineries in Canada. The others are located in Montreal, Quebec, and Edmonton, Alberta.

In 1999, the Canadian government instituted regulations that required Canadian refiners to dramatically reduce the amount of sulphur in gasoline, down to 30 parts per million, by 1 January 2005. Shell Canada got to work early and became the first Canadian refiner to produce low-sulphur gasoline – a full two years ahead of Environment Canada’s deadline. But it was a tough journey, with many obstacles along the way.

Erich Wonchala is Shell Canada’s head engineer for heat integration and catalytic reforming. It was his task to optimize the energy efficiency of the process for producing the lower-sulphur gasoline at the Sarnia facility, but he was faced with several challenges. A new hydrotreater to remove sulphur from gasoline required large amounts of energy to operate. To supply that additional energy, he had the option of building another furnace boiler in his steam plant, but with the plant already close to capacity there was the potential of having no backup in the event of a boiler failure.

On top of that he worried about the significant new energy costs and harmful emissions a new furnace would entail. He says the question was how to actually use steam as an energy input without adding another furnace boiler.

The answer turned out to be to increase the feed-water temperature to the existing boilers by recovering heat from hot process streams found elsewhere in the refinery. Heat exchangers have been used for years in many industries to capture energy produced in one part of a system and transfer it for use in another area.

Wonchala looked at using three combined high-temperature point sources at the refinery but rejected this idea as too complicated and difficult to control. Instead he settled on a single source, the overhead vapours from the refinery’s catalytic cracker, or “Cat Cracker,” where the oil is converted into various petroleum products. “There’s a lot of heat liberated there, many millions of BTUs an hour,” says Wonchala.

For large high-temperature and pressure heat-transfer duties, such as those found in oil refineries, shell and tube exchangers have been the traditional choice for heat transfer equipment. Says Wonchala: “They’ve been the bread and butter in the industry since day one. Everyone understands them.” But the shell and tube arrangement comes with some downsides, including more fouling and reliability issues because of corrosion. Wonchala wrestled with the technical challenges of the temperatures and pressures in the overhead vapours and cold-water sources.

“I tried to do it in a conventional shell and tube exchanger,” says Wonchala. “I looked at several possible designs and configurations, but I could not come up with a practical design that would deliver that heat transfer and stay within a very narrow pressure-drop range required in the Cat Cracker. It was virtually impossible to do it in a shell and tube technology.”

However, with the plate heat exchanger concept, the thermal and hydraulic constraints could be overcome. Wonchala says he and the other Shell engineers did look into using a semi-welded plate heat exchanger, where the external sealing is alternating between welds and gaskets. “But we didn’t like that idea at all because these gaskets can leak after a few years, and then you run the risk of environmental releases,” he says.

Due to these factors, the Compabloc heat exchanger was chosen as the best solution. There have been hurdles for Shell to overcome since going fully online in January of 2003. “When we first started we got exactly the heat recovery we expected,” says Wonchala. “It was bang on.” In August of that year, however, the north-eastern and mid-western United States and province of Ontario in Canada suffered the largest power outage in North American history, affecting 10 million people in Ontario alone. It brought down the refinery, causing fouling in the units. Even so, explains Abid, the thermal performance remained steady and reliable. Wonchala echoes that assessment. “Thermally, I was amazed,” he says. “It was still recovering the heat it was supposed to.”

The Sarnia Warm Water Loop project earned a 2005 honourable mention in Canada’s Natural Resources Energy Efficiency Award programme. But Shell is not resting on its laurels, as it continues to seek ways to improve its environmental performance by maximizing the efficiency of its operations.

Shell's goad is to produce more than 500,000 barrels a day from Canada’s oil sands, but with this increase in production, emissions of CO2 will go up too. To manage these emissions, technology and energy efficiency are top priorities for Shell.

Shell’s position on emissions and climate change flows from the very top. Royal Dutch Shell Chief Executive Jeroen van der Veer has stated in the debate about manmade climate change, “Businesses like ours need to turn CO2 management into a business opportunity by leading the search for responsible ways to manage CO2 and use energy more efficiently.”

A loop that saves energy

Alfa Laval’s Mohamed Abid worked closely with Erich Wonchala and the Shell engineers to configure the Compabloc plate heat exchangers, which became an integral part of the energy stream.

The term Warm Water Loop came from Shell’s initial examination of several high-temperature streams around the refinery from which energy could be recovered into the boiler feed water. The company was using cooling water to cool those very hot streams, some of which ran as high as 204°C (400°F). Not making use of that heat was a waste of potential energy. The Compabloc technology made it feasible to use a single heat source, the catalytic cracker, or “Cat Cracker,” to provide the power needed for the new low-sulphur process.

The design called for eight condensers arranged in two rows of four, on platform on top of the other, in a structure adjacent to the Cat Cracker. To reduce the corrosion problem, the plates were made of an exotic alloy known as Hastelloy C276, instead of more conventional carbon steel. And to solve the nagging problem of leaking exchangers, the Compabloc was given fully welded heat transfer surfaces instead of the customary gaskets. And with eight units working, the plant can continue operating even if one should idle. The installation was the first of its kind in all of North America.

An immense project, the loop incorporates 5,600 feet of pipe hooking everything together. The basic route takes the cold feed water from the steam plant and pipes it to the exchangers, where heat is exchanged with the overhead vapours from the catalytic cracker, after which the feed water is piped back to the boilers at a usable 110°C (230°F), completing the loop.

Shell’s gasoline hydrotreater project led the way in the production of low-sulphur gasoline in Canada in a sustainable way. The Alfa Laval Compabloc was a key part of the Warm Water Loop project that enabled Shell to reach its low-sulphur goals with significant benefits in energy savings and reduced CO² emissions. Annual greenhouse gas emissions have dropped by thousands of tonnes, and the refinery’s energy savings are substantial. Both Erich Wonchala and Mohamed Abid agree that only the Alfa Laval Compabloc plate heat exchanger’s unique combination of plate heat transfer rea design, welded construction and low pressure drop could deliver these sizable energy savings at the Sarnia plant.